June 17, 1970, I graduated from Royal High School.  I headed to  Oregon for college and never looked back.  Sure, my freshman summer was spent at home.  The next two were in Wisconsin at summer camp jobs.  The summer of 1974, I found a teaching job in Oregon(much to the chagrin of my parents who wanted me to return to Simi) and experienced the break-up with the man I thought I would one day marry, my high school sweetheart. (We have remained good friends.)

I began a life in Oregon and SW Washington which would shape my beliefs, traditions, culture, and values.  I am a Pacific Northwestern gal at heart.

I made the tenth reunion(with my ex-husband), the 20th (w/o anyone being newly divorced and testing the man who would become my husband), skipped the 30th, and this year I invited my husband to attend the 40th with me.

This reunion was at once fun and overwhelming.  It was great to re-connect with friends.  One of the best things that happened was reconnecting with Royal friends through all that new fangled technology called Facebook (I am personally glad that my high school and college years could not be documented through such technology). Look, I found that both Toni and I found the same career paths.

Toni and me, school librarians rule!

Some people were missing from the reunion and you wonder why: where are they?(Especially if they are not on the missing and deceased list).  Some of these people were in my sixth grade class.  I had moved from Monrovia, CA to Simi Vally, CA in 6th grade, others friends from seventh grade on. Like my friend, Bertha and Elayne (in picture below). 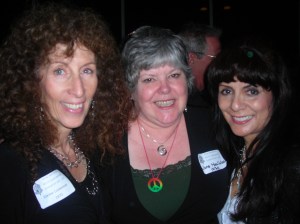 Bertha and I were in orchestra forever. Then in the summer of 1969 the three of us went to France for 6 weeks in a French language study. Oh, the fun!

These friendships are tried and true.  We can pick up from where we left off.
In an era where politics have become increasingly polarized, politics were left at the door in favor of remembering that era of  “peace, love, and happiness.”
Living in Portland is different from living in SoCal, life is slower.
Probably was among the least tan there. thank you Oregon! (having had an in situ melanoma removed in 1992 I am grateful).
Glad to know we only have to wait five years before meeting up again.
Loud music is fun to dance to but lousy for conversations.
I am looking more and more like my mother.

Late Saturday and Sunday, we exchanged emails and submitted Facebook friend requests.  Will technology be a means to keep us a lot closer?

forty years
we still laugh, give the peace sign
dance with abandon

This entry was posted in Haibun. Bookmark the permalink.