I am still reeling from the phone call I received Wednesday evening about Bridget, “Cancer Warrior Extraordinaire.” My 91 one year old aunt is dying and that’s the shoe I have been expecting to drop and the phone call I was supposed to be getting, NOT one about Bridget. I am not sure I have the words to express what a privilege it’s been to have Bridget be a part of my life.

I met Bridget in 2008 at the Kidlit Con Blogging Conference in Portland.  Our connection was immediate, both being librarians.  I remember her vivacious personality.  It was she that suggested the Kidlit Drink Nights on the Fifth Friday of any given month. 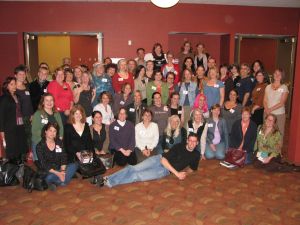 Bridget is front row, second from the left.

Just six months later, Bridget received shocking news: Stage  IV colon cancer.  Bridget arrived on the fifth floor of Legacy Emanuel Hospital which happened to be my RN nurse daughter’s floor so I knew she was in good hands.  I let my daughter know of Bridget”s passing and she remembered Bridget and Barrett’s hospital wedding. She said they all talk about the wedding still.   That’s when Bridget became a “cancer ninja” to kick cancer to the curb.  The Portland community rallied and held both a silent auction and an auction at one of our “Fifth Fridays” raising over $16,000 for Bridget and Barrett. 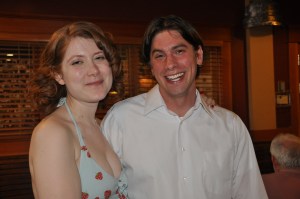 One thing that I loved about Bridget was her sense of fun and her declaration of “birthday week.”  The Portland Kidlit community spent a Fifth Friday together to kick off her birthday week in 2009 and 2010.

I was fortunate enough to spend an evening with Bridget, Barrett, and her father among others in March at Moonpie Pizza.  It was such a lovely evening filled  with laughter and light.

I am haunted by the fact that Bridget emailed me in early May about her decision to stop chemotherapy and a request to  “somehow focus all of this good energy people have been sending me.” My asthma flared up and I didn’t answer the email all the while pondering the request.  So Wednesday’s phone call was so unexpected and so just wrong.

Bridget has been one of the most luminous persons in my life.  Her light will continue to shine through out the universe.  She so understood this energy force of life.  I will miss her terribly.  I look forward to her book being published.

This entry was posted in Vacation. Bookmark the permalink.